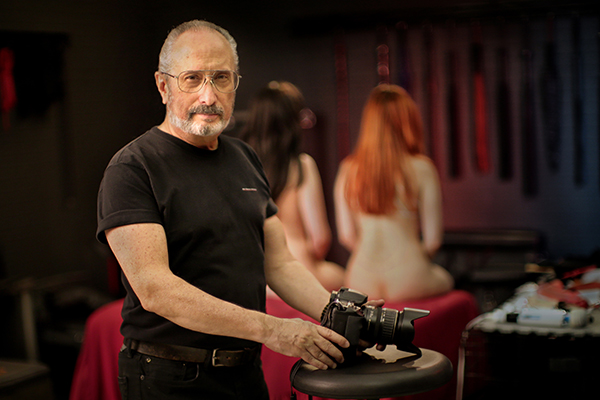 The Man, The Myth, The Legend!

Ken Marcus doesn’t miss much. His preternaturally level and penetrating gaze, from behind his trademark wire-rimmed spectacles, always seems to be composing, cropping, focusing, as if to organize the whole world into frames. The power of observation so evident in his photography’s painstaking attention to detail is never at rest, even in casual conversation. Slender, compact and intense, Marcus’ personal style has taken on some of the sharply-honed austerity of the images in which he now specializes.

If his contemporary work is rigorously shibui, it is not far from his creative roots. Long before he shot the first of what would eventually be a vast catalogue of feminine glamour photos, Marcus spent 13 years studying with Ansel Adams, arguably America’s photographer laureate. From Adams, whom he met in his early teens through a photography workshop affiliated with the University of California at Idyllwild, Marcus learned how to shoot fine-art black-and-white landscapes.

“Up until the age of 13,” Marcus remembers, “I used my eyes, but I didn’t really know how to see. I was taught how to see by this great teacher/artist (Adams) who shared his incredible vision. To learn basic composition, he handed me a piece of black cardboard with a four by five inch hole cut out of the middle. I would hold that cardboard up in front of me as he would explain that out of all the worlds visual chaos, we can select the segments that are personally meaningfull. That awareness changed my life and launched me into my lifelong persuit of imagery”.

By the age of 15, Marcus had already set his career course, taking university-level photography classes at L.A.’s Art Center College of Design at night, while completing his secondary education during the day.

A third-generation Californian, Ken Marcus was born in 1946, in Hollywood. Throughout his early life, Ken studied classical music, art, and photography. In 1964 he began his photography business, and the following year opened his studio in the middle of what is now the trendy Melrose Avenue shopping district. “Though I’ve traveled the world extensively, ” Marcus observes, “I’ve always maintained my legal address within a block of Melrose”.

His early work was, in some respects, closer to the ideal he pursues today than to the vast body of glamour photography, including hundreds of Pet and Playmate layouts to which his name is frequently associated”.

I began with erotic photography, Marcus explains. “I really had no interest in commercial glamour. I was rather shy around women as a young man. It was a girlfriend who introduced me to the artwork of Gustv Klimt, particularly an image he had done of two women together that struck me with unusual force. From that inspiration, I first got interested in doing nude photography with the idea of exploring relationships between people. This was coinciding with the sexual revolution that was going on at the time. As the general community around me was exploring sexuality and eroticism personally, I was interested in exploring and documenting it visually”.

His experimental images of nude women and couples led to a first assignment from Penthouse magazine, which had just managed to make it onto American newsstands as the result of a Supreme Court ruling that “entitled Americans to legally see the human body in its entirety on film for the first time”.

“There was a period of several years when I was so busy with magazine assignments that I didn’t get into the darkroom at all, when I never shot anything for myself. I longed for this. I missed it. After I finally left Playboy, I spent more and more time working in my studio shooting models with the simplest of set-ups, getting away from the kinds of complex glamour things I had done. The work I do for my website now exemplifies that softer, simpler vision”.

“I like to take advantage of the diversity of lifestyles we have here in Los Angeles. The new work I’ve been doing has involved bondage, fetish and nude models. I really enjoy working with ballet dancers, body builders, performance artists, athletes and others involved in body self-expression and alternative lifestyles”.

Reflecting on his subjects from the fetish scene, Marcus is typically perceptive. “Fetish photography works best when the people being photographed are a part of the world from which the fetish element derive. The strength of the work has less to do with any particular fetish than with the effect of the fetish on the subject. You can take a wonderfully beautiful model, put her into fetish gear, and if she doesn’t relate to it sexually, why bother? What you end up with is a catalogue shot. You have to be where the real people are and they have to trust you enough to reveal who they are and how they want to be portrayed.”

Born (1946) and raised in Hollywood, California, Ken began his interest in photography at around age 5. Self-taught, but encouraged by his parents Ken established his first darkroom in the family basement at age eight and became active in local camera clubs and amateur photo activities.

Ken also attended the Art Center College of Design to study fashion and advertising photography. He later attended Brooks Institute of Photography in Santa Barbara then returned to Hollywood in 1965.

Ken has taught advanced photographic technique and production through special classes, seminars and workshops at: The Tahoe Photograpic Workshops. the Palm Beach Photographic Centre, the Art Center College of Design and Brooks Institute of Photography. He also has produced an award winning Video Series on Professional Techniques of Glamour Photography.

Ken Marcus received his business license and began his professional career at age 17 while sharing a studio with special-effects photographer Don Carroll.

One year later in 1965 he opened his studio on Melrose Avenue in Hollywood, Ca. and began shooting for advertising, editorial and entertainment clients.

Ken now is ‘officially retired’ from the commercial world of photography and is involved exclusively with producing images for his website. Shooting erotica 2-3 days a week is his idea of’ ‘retirement’.